Nevergrind is a free browser RPG developed by Neverworks Games. Nevergrind offers hundreds of hours of addictive, fast-paced gameplay. Nevergrind was originally inspired by classic Everquest, yet it has a motley blend of influences from many seminal RPGs. The battle format is reminiscent of Phantasy Star III. The real-time combat takes a cue from MMORPGs. The item design is akin to that found in Diablo 2. The browser-based design was also inspired by Progress Quest. Nevergrind takes all of these inspirational sources and adds its own unique features, such as a combo rating system.

NeverGrind is set in the world of Vandamor, a land inhabited by orcs, giants and dragons! Battle against the occult forces that have sewn chaos and destruction throughout the world. Nevergrind’s gameplay is focused on fighting battles and completing quest objectives throughout four acts. When you first start out, you’re just a recruit helping secure the perimeter of Edenburg. Your commander, Miranda Crossheart, sees your potential and keeps you busy with more difficult quests. This leads to your first boss encounter at Lanfeld Outpost, Chief Grimden. In a similar fashion, each act climaxes with a tough boss battle through which more of the game’s story is unveiled to the player.

Treasure-finding is a key feature of Nevergrind’s gameplay. Finding rare, powerful items is the best way to make your character more powerful. Since loot is so important in this type of game, a great deal of time and energy was spent designing exciting items. In addition to items with randomized properties, there are more than 800 uniquely designed items that can be discovered. You can even find items from 28 different sets which provide bonuses as you equip more pieces.

The combat system also rewards competence. Completing chain combos is a great way to boost rewards, including experience gained, gold find, and magic find. A chain combo is achieved by killing consecutive monsters without leaving combat. Racking up a huge chain combo requires smart equipment decisions, understanding of the item properties, and masterful command of your class’s skills. You can even boost your rewards by fighting multiple enemies at once. As any well designed game should be, taking on big risks leads to big rewards.

Nevergrind was produced and programmed by Joe Leonard. Joe served in the US Air Force as an Electronic Warfare technician on C-130s and the Rivet Joint. Today, Joe now works as a senior technical writer for S4. In his spare time he develops browser games and produces YouTube video content. Joe and his wife live together in Maryland raising their three children.

Nevergrind launched its Kickstarter campaign on March 18th. The campaign was successfully funded at 130% of its goal. It managed to meet its first stretch goal to unlock the Nevergrounds, a player profile page that makes it easy to share data in the game. 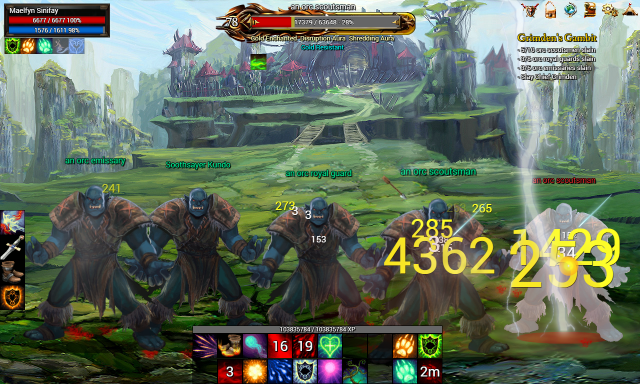 A Ranger unleashes a hail of lightning arrows on a horde of orcs. 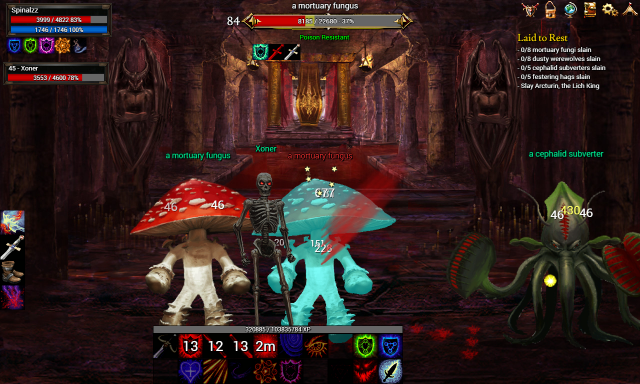 A Shadow Knight draws blood from a mortuary fungus. 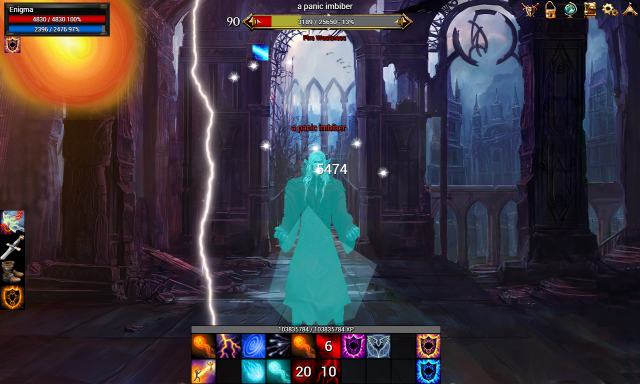 A Wizard summons a meteor to finish off a panic imbiber amidst a hail of lightning. 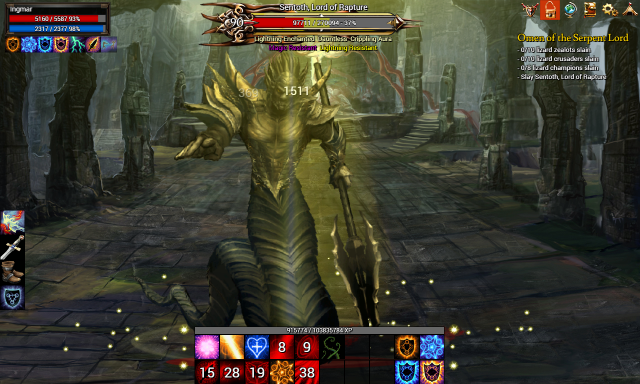 A Cleric squares off against Sentoth, the Lord of Rapture. 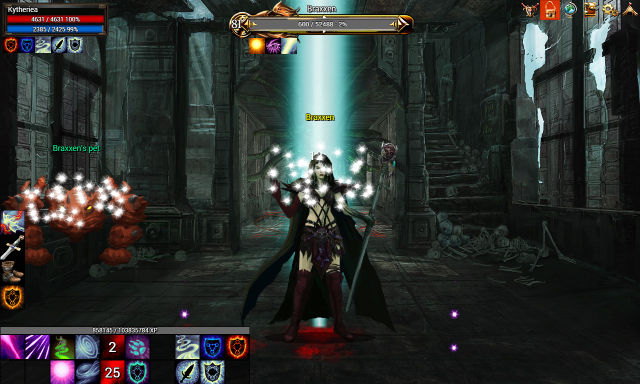 An Enchanter mesmerizes her victims with a jubilee of dazzling light. 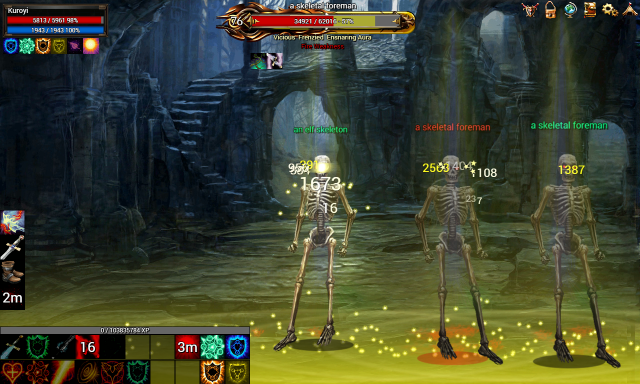 A Paladin bathes the undead in holy light. 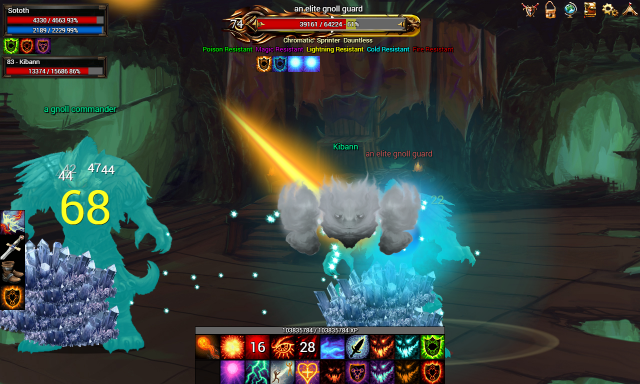 A Magician devastates an elite gnoll guard with a volley of fire and ice.

Contact Joe Leonard at support@nevergrind.com for all media-related queries.

“I have been bored out of my mind lately! Playing junk games…. This game is my savior! Now my question is:

Why the heck are there only 15 players online? This game is ridiculous! Everyone help advertise the game! I posted on a bunch of forums already! Game is absolutely amazing!” -raserei

“I like it. Also I really like this game and really like you as the game’s creator. Not to dick ride or anything but you seem pretty awesome.” -beaster

“Again.. just cant help myself but to say it.. YOU DID A FUCKING AMAZING JOB with this game. Tried several different classes and was pleasantly surprised on uniqueness of them. Lots of great ideas. Much respect.” -moszis

“Man, this game is so good. You’ve done a great job and I love the class design on the warrior.” -bixxby

“Love this. Played a ton of EQ earlier in life and this brings back memories.” -jellybonez

“This is incredibly well done, great job man. I spent a bunch of time last night leveling a Female Troll Shaman on Hardcore, so far so good, a few close calls with those fearing necros. It’s like a mix of EQ, WoW and D2 with none of the filler, just fights.” -tuptain

“BTW Maelf you did great work and made an insanely fun and addicting game.” -Szeth

“This comment made me try the game, LOVED EQ but will never play it again. Expected to play maybe to level 2. Started an Enchanter, found out you can med while a mob is charmed 6 hours later I was like WTF this is awesome.” -Hatorade

“Agreed, thanks much. Definitely entertaining to me” -Altaruk

“This is utter filth. Somehow you’ve condensed the least enjoyable parts of an online game into a repetitive eye-bleed.” -LuposDavalte

“No i’m not going to play your shitty browser based MMO keylogging garbage.” -Tiggles

“Love the idea of this game, but cannot understand how you guys can sit and play this for more than 5 minutes.” -Flaw

“Changed sound and names away from EQ. And for those that got used to the icons, changed them to gay. Played the shit out of it and looked forward to playing every class and race and doing it all. Took a break because it took out too much of my time, and came back to this current disaster.” -Sacel

“Yup. It’s a horrible disaster. I don’t know how they think they will keep any of the current players, because 99% of the appeal for 99% of people playing was the nostalgia. Now it’s all gone and apparently he’s just working to remove even more and change it away from EQ entirely. Absolute disaster, so, so bad and sad Wish I’d have known I’d have played more before this happened. I had the same plans to play every class.” -Morrow

“Hehe, NOTHING like EQ at all. Maybe the Race and Class selection, but that’s it.” -D Stephen Pritchard II